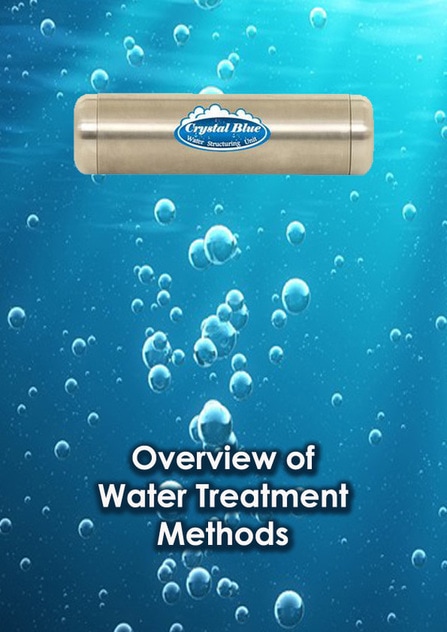 Please keep in mind that the methods spoken of below do not included Water Structuring, but only those methods used to remove the solid or chemical contaminants from the water which is accomplished without improving the water’s ability to carry and convey the energy and information so necessary for all life on earth, as only Structured Water can do.

The following is a brief overview on drinking water treatment.

The appearance of particles in water. Filtration was established as an effective means of removing particles from water and widely adopted in Europe during the eighteenth century. Exactly why a clean and reliable water supply was needed was not known until the second half of the nineteenth century, when the nature of infectious disease was first recognised and the ability of water supplies to transmit diseases such as cholera and typhoid was first demonstrated. After this, concerns about the quality of drinking water focused on disease-causing microorganisms (pathogens) in public water supplies. Scientists discovered that visible cloudiness, or turbidity, not only made the water look unappealing, it could also indicate a health risk. The turbidity was caused by particles in water that could harbor pathogens.

Most urban communities collect water from a natural water body in the catchment, whether a stream, river, or underground aquifer. The water collected may then be stored in a reservoir for some time. Unless it is already of very high quality, it then undergoes various water treatment processes that remove any chemicals, organic substances or organisms that could be harmful to human health. The water is then delivered to the community through a network of mains and pipes called a distribution system.

The importance of good drinking water in maintaining human health was recognised early in history. However, it took centuries before people understood that their senses alone were not adequate judges of water quality. The earliest water treatments were based on filtering and driven by the desire to remove the taste and As a result, drinking water treatment systems were designed to reduce turbidity, thereby removing pathogens that were causing typhoid, dysentery and cholera.

By the early twentieth century, better protection of water supplies from sewage pollution and simple but effective methods of water treatment (chlorination, sand filtration) had greatly reduced rates of waterborne disease in developed nations. Since then, scientists and engineers have been developing ways of processing water more quickly, more effectively, in a more controlled way and at lower cost.

The processes and technologies used to remove contaminants from water and to improve and protect water quality are similar all around the world. The choice of which treatment to use from the great variety of available processes depends on the characteristics of the water, the types of water quality problems likely to be present, and the costs of different treatments.

The most widely applied water treatment technology, a combination of some or all of coagulation, flocculation and sedimentation, plus filtration, has been used routinely for water treatment since the early part of the twentieth century. Sedimentation, coagulation and flocculation Some particles will spontaneously settle out from standing water (a process called sedimentation). When particles are slow to settle or are non settling, chemicals (coagulants), such as alum, are added to the water. These react with the unwanted particles to form larger particles, called floc. The larger size and weight of the flocs then causes them to settle rapidly.

Coagulation and flocculation are very effective at removing fine suspended particles that attract and hold bacteria and viruses to their surface. They can remove up to 99.9 per cent of the bacteria and 99 per cent of the viruses from water supplies. They also remove some of the organic matter that gathers as water travels across the landscape, from raindrop to river. However, certain taste and odour problems may remain.

Filtration occurs as the water passes through filters that help remove even smaller particles. One of the oldest and simplest processes used to treat water is to pass it through a bed of fine particles, generally sand. This process of sand filtration usually removes fine suspended solid matter as well as some other particles, such as larger microorganisms.

Filters can also be made of layers of sand, gravel and charcoal. The development of new synthetic materials has led to a new range of filter materials and methods. Processes based on these new materials are used increasingly to treat water for urban and industrial purposes. In membrane filtration, water is filtered through tiny holes (pores) in a membrane wall rather than a bed of sand. The smaller the pore size, the more material is held by the membrane as the water passes through.

While coagulation, often combined with filtration, will remove most of the troublesome contaminants from water, these processes do not usually remove all the material dissolved in the water. If the water contains undesirable impurities, additional treatment such as adsorption and oxidation may be required.

Adsorption is a form of chemical filtration that involves removing dissolved substances by chemically or physically binding them to the filter material. It is quite different from the similarly sounding process of absorption. In water treatment, specialised adsorbent materials such as activated carbon and ion exchange resins are used to remove certain soluble contaminants from water.

One way of using activated carbon is to percolate water through a bed of carbon granules. Once the carbon is saturated with the contaminants, it needs to be replaced or regenerated by heating it to a high temperature. If water contamination occurs only occasionally, but can be detected by a regular monitoring program, a better approach is to add powdered activated carbon to a conventional coagulation/flocculation process when a problem arises. The saturated carbon is collected in the filters and then discarded with the normal sludge from the water treatment plant. This form of intermittent dosing is widely used where there are occasional problems with blue-green algal blooms, which can cause taste and odour problems, and can also be toxic.

Some water supplies can become acidic or alkaline by dissolving or reacting with the material they are in contact with. This can cause piping systems and hot water services to corrode and cause dissolved metals to appear in the water. For example, a common sign of copper corrosion is a bluish stain where a tap drips onto a surface. To prevent corrosion, many waters are chemically stabilised to a particular pH before distribution by adding lime and sometimes carbon dioxide.

Water is disinfected to kill any pathogens that may be present in the water supply and to prevent them from regrowing in the distribution systems. Without disinfection, the risk from waterborne disease is increased. The two most common methods to kill microorganisms in the water supply are oxidation with chemicals such as chlorine or ozone or irradiation with ultra-violet (UV) radiation.

And here is another more detailed description of the various methods used to physically cleanse water.